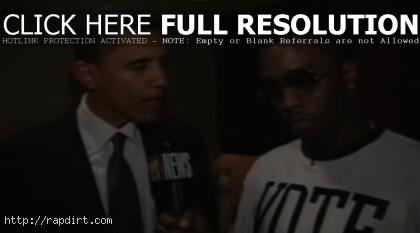 Sean ‘Diddy’ Combs, a.k.a “Ciroc Obama”, posted some footage of his interview with Barack Obama back in 2004 for MTV News, when the President-elect was running to become the senator of Illinois. In an intro by Diddy, the Bad Boy boss said, “It’s some footage that I’ll always thank god that I have and I had a chance to meet and talk with the great man.” Watch the video below.

One thought on “Diddy Digs Up 2004 Interview With Barack Obama”