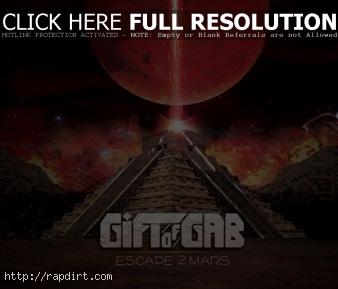 Blackalicious member Gift of Gab is set to release his new solo album ‘Escape 2 Mars’ on October 27th. Production on the album was mainly by the Bay Area’s DNAEBEATS, with a few tracks also helmed by Hednodic. Del the Funky Homosapien and Brother Ali, another two undeniably iconic MCs, are featured on ‘Dreamin”. Gab also recruited some of the talent from the Quannum Collective he helped pioneer, including Joyo Velarde, Lateef The Truthspeaker, and Honeycut’s vocalist Bart Davenport.

His hopes of keeping things close to home set the stage for the album’s inspiration. “People are gonna think this is about Martians, but it’s not,” Gab explains. “It’s more so about taking care of the planet we’re on. We might have to escape to Mars or somewhere else if we keep taking the planet we live on for granted. I’m not trying to preach to anyone,” he continues. “I just think it’s important for us to raise the level of consciousness and consideration of these things.”