Soulja Boy Fires Back At Critics In Lengthy MySpace Bulletin 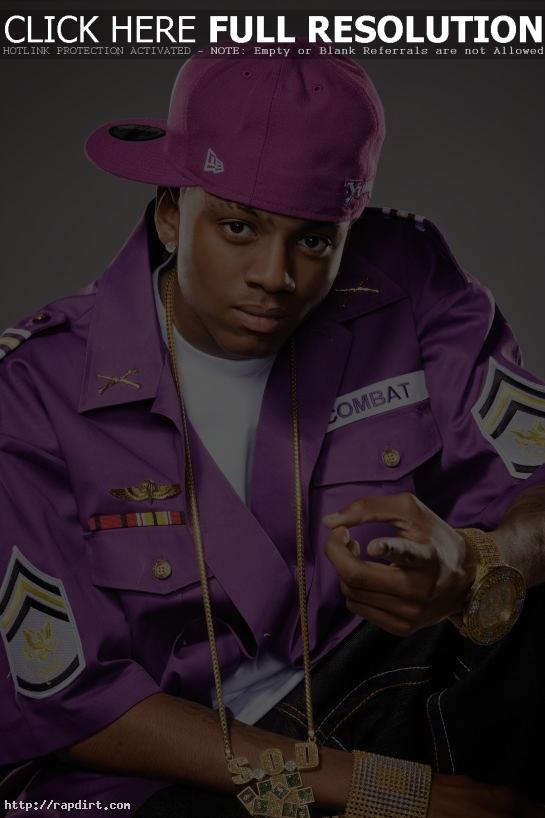 Soulja Boy wrote a gigantically long bulletin to his MySpace friends (@souljaboytellem) on Thursday (January 10) firing back at a string of attacks he’s found himself facing from all corners. He writes:

– Wuz hannan dis ya folk Soulja Boy I just wanna let all my fans know that rumor about me having a baby on the way is not true.. So FU** that site Mediatakeout And FU** Bet Black carpet for lying on me! Every week is something different.. They Said my Mom was dead. They said I got a girl pregnant. They said I got shot.. Wowww it will never end.. You can’t believe sh** about me coming from Mediatakeout so if u see it you automatically know dat sh** false.. I guess whoever runt that site personally dislikes me lol And Oh yeah this is my only MySpace page all the others is fake. And FU** D.O.B. for lying and saying I’m joccin them I never heard of them in my life if I leave a comment on ya page and say yo music tight u should take that sh** as a compliment DUMB ASS! And when I come to Ohio I wish y’all niggaz would try some sh** I will beat the sh** out of y’all niggaz myself Y’all niggaz got 3 lifetimes to go b4 y’all can get on my level. Big ups to all my hataz shouts out to everybody gettin they money and hustlin tryna get signed and got respect for niggaz like me in this game. Y’all stop being hard headed and pay attention sit back and watch how its done. Yall niggaz will never see me down and out. I will continue to get money. All my real fans who holding me down I love Y’all! It’s a lot of fake ass people in this world. S.O.D. Money Gang Run this sh** don’t 4get that. I look around and see a lot of haters.. Even famous people who don’t know me. Steve Harvey hating? I mean Damn.. STEVE HARVEY? WTF I grew up watchin this nigga on TV and he wanna get on radio saying my songs are vulgar and trying to stop me from gettin my paper. I mean damn dude if yo son was out here trying to provide from his family you wouldn’t wont someone trying to stop his success and making up sh**. How you gone say some sh** on Radio where A LOT of people will believe just because of who you are leave your mouth if you didn’t make sure it was true? I got old ass niggaz from Wu-Tang dissin me. Some dude named GZA from Wu-Tang Clan dat was born in 66′ lol, who I never met in my life.. I’m like wow.. Then I seen a video of Jody Breeze talking sh** about me? and for WHAT? Cuz they mad at all this Perfection. Don’t hate. INHALE IT IN NIGGA BREATHE IT IN! BASK IN IT!

– *Changing the subject*, So today I woke up and got like a hundred emails about the “Crank Dat Batman” Music Video.. Now I have a song called “Crank That” Right? And in it I refer to Superman right? lol.. That’s like if I make a song called “White Tee” and they turn around a make song called “Black Tee” and get a music video WTF? lol.. but imma leave that sh** alone I hope they ready for the game… And they got they heads on right cuz this sh** is tuff. Right now they enjoying they self cuz they got a music video and radio play and a little money in they pocket. But REMEMBER, I already have done everything that your about to TRY to do, But as time pass by this game gone be hard. Yall keep ya heads up and get y’all money. This sh** not easy as it looks if you planning on having a career with that.. Shouts out to “P.O.B” y’all do y’all thang ITS A MOVEMENT.

– *changes subject* A lot of people say I COPY and BITE people styles. Nigga you don’t own a style or a word or a dance.You telling me if i make a dance and somebody else do it imma say u stole it? Hell naw look at how many people do Crank that and switch it and make they own dances and sh**. You telling me if you said something in yo song I can’t say it in my song? WTF that’s what rappers do. I said Walk It Out in a song. You think UNK gone say I bit him? Naw cuz he got more since than that and know the Game. If I make a beat that’s similar to another beat that’s stealing? No, No the fu** it ain’t. Listen to most of the songs out now everybody sh** sounding alike now adays people wanna add SNAPS in they songs every since D4L and DFB. You think when I met D4L or Franchize they said I was copying? Hell naww But on some real sh** if you look most of these rappers on MYSPACE where they get ideas from? ME NIGGA THATS WHO! If you look at these folks MySpace TOP FRIENDS and they all got the DEFAULT Picture saying SUPPORT THEM or “HIS/HER Number 1 Fan” or you see them with FAN PICS on they page.. I started all that sh**! Now say I didn’t! If you a nigga and you got a “Crank That” song period about anything and you getting a lil fame or success on it and you diss me or say something bad about me your STUPID WHAT THE HELL IS YO PROBLEM!? You should be thanking me! For opening up the door to this kind of music. Becuz b4 me record labels wasn’t looking for this kind of music to sign! I broke a barrier for us and hustle and grinded SO DAMN HARD TO GET US HEARD! Now people looking for the next HOT CRAZE or DANCE. THEY LOOKING FOR THE NEXT “SOULJA BOY” But its only 1 Of me! I’m nominated for a Grammy behind this sh**. So next time you think about saying something reckless just stop and really think about that sh**.

– *changing subject again* I Figured it all out.. Lol I know Why people hate. I was a Celebrity before the Deal. I’ve been hated on my whole life and for what? CUZ IM THE SH**. I sit back and say hey? Why they hate me so bad? It’s becuz this sh** is AMAZING I just broke the record for The Most Digital Sales for a Song EVER! Over 6 Million ringtones sold. Album at 700,00 Sales about to go platinum. MILLIONS OF FANS LOVING ME WORLDWIDE. I blew up so fast and I’m so famous that sh** confuse people. They like HOW IN THE HELL did this lil dude do it? lol Don’t hate me hate yourself for not gettin off ya ass and doin some wit ya life. It’s not my fault u suck lol. My 1st Music Video Crank That is at 29 Million views. WTF? 29 MILLION VIEWS! That’s crazy. what make is so funny all these people I was watching on TV like a year ago are my friends now lol and they next to me everyday. I blew up and got super famous but didn’t change lol I still be in Wal – Mart Shopping my fans run up like WHAT DA FU** u doin in WAL MART? lol I still answer my emails I still post up fans pics and still do shows in the hood and at schools. I sign EVERYONE autograph. This don’t mean nothing to me except I’m RICHER, WAYY MORE FAMOUS, AND HAVE A LOT OF PEOPLE THAT LOOK UP TO ME. And I love y’all with all my heart I know there’s a lot of people who wish they were in my shoes, or just wish they were living a better life and not in the situation they in. I’ve lived it I KNOW HOW IT FEEL! You feel like its no hope? LIFE IS HARD. But sh** this is LIFE I’m just one blessed dude that made it. I’ve Been broke as hell for 16 Years, And I’ve Been RICH for 6 Months. And sh** ain’t really changed.. It seems like all the people who I TRY to help either BETRAY, CHANGE, Or TURN THEY BACK on me.. The only person who been with me since day one and Understands is Arab. And I love that nigga on some real nigga sh**. Only a lame would say man Soulja Boy u gay for saying that. In the words of Boosie *If you love yo nigga, Hug Yo nigga*. I’ve known a lot of niggaz in my life.. None of em made it out the hood with me. Why?? Cuz they was to jealous and thought they was the sh** when they really wasn’t people only wanted to see em or hear em becuz they was my friends and was hanging with me.. But they failed to realize that. They thought they actually had fans and they thought they didn’t need me lol.. Where they at now? Sad…

– All My REAL fans that’s gone hold me down. Let’s have fun and imma continue to make these hits and come to yo city and rock the stage. All my hataz lets continue to see me shine and go head and envy me and talk sh** about me a little bit more, Time to make up some more rumors drink a lil bit more haterade say I can’t rap and try to get people to dislike me lol. People say Soulja Boy you too famous to diss dem back or reply that sh** you too famous for it. Fu** that I ain’t too famous to do sh** if something ain’t right imma address that sh**! PEACE!