Jazze Pha, Big Gipp of the Goodie Mob and daughter Kepsiia Gipp, and Sherlita Patton and Antwan ‘Big Boi’ Patton of Outkast were on hand for The Dallas Austin Foundation 1st Annual “Don’t Stop the Music” Gala on March 19th at Georgia Aquarium in Atlanta, Georgia. Check out pictures from FilmMagic and WireImage.

Bigg Gipp from Goodie Mobb and Ludacris were on hand at the Y-3 collection launch party with Dallas Austin on September 10th at a private residence in Atlanta, Georgia. Check out pictures from WireImage. 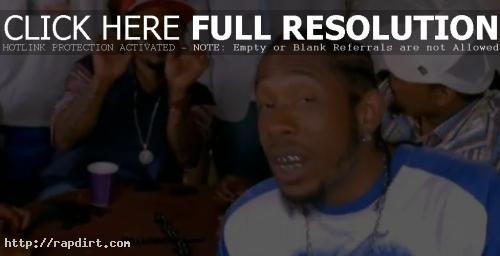 Goodie Mob is out with the video to their new single ‘Play Your Flutes’, featuring Sleepy Brown, from their ‘One Monkey Don’t Stop No Show’ album due out next Tuesday (June 29). Watch it online below.

Goodie Mob, Big Boi of OutKast, Killa Mike, and Sleepy Brown were spotted at the Gershrin Hotel on Friday (June 4) in New York City. Check out pictures from FilmMagic.

Carl Chery of SOHH.com caught up with Goodie MOb’s Gipp, who was full of opinions on his hip hop counterparts, including Cee-Lo, Ludacris, Ying Yang Twins, Lil’ Flip, 50 Cent, and Young Buck, sharing his most critical comments for the last two. “I ain’t dissing 50 Cent, but ni**as know he can’t rap better than the average rapper in the South, period,” Gipp said. “He raps like he’s a Southern rapper and he sounds like he’s from LA. Dude don’t say nothing fly. He’s not a lyricist like Jay-Z. He’s very, very southern with his rap. His sh** is 1, 2, 3, 1, 2, 3…just like Buck, 1, 2, 3. Ain’t nothing flashy about, ‘I’ll buss your motherfu**in head, but at the same time too, dude had a story. You got to understand in the South dog, we heard about folk getting shot up 9 times before I even heard his music so to a certain degree it’s just how Hip-Hop is promoted now. Is that a way to come in the industry just because you got shot 9 times they want to listen to you now? I thought this was about music.”

Despite his recent trials, Goodie Mob founding member BIG GIPP has found strength in his faith and the love of a good woman. The rapper, who will release his solo debut, Mutant Mind Frame, August 12 on Koch Records, has managed to balance his double life as a major recording artist and family man. With most celebrity marriages ending shortly after the honeymoon, it’s no small feat that Gipp and his songbird wife Joi have been able to avoid the havoc fame and fortune can play on a relationship.

The full story at sixshot.com has since been removed.

With strong artists such as Ludacris, Ying Yang Twins, David Banner, Archie Eversole, Clipse, and many more, how does anyone else stand a chance? I believe the south has rose again. Not for pro-white people, but for the rap industry. I guess this isn’t exactly what white southerners expected. They were right. The south has risen.
END_OF_DOCUMENT_TOKEN_TO_BE_REPLACED