Jadakiss brought out Cam’ron at Apollo Theate in Harlem, New York last night, performing a bit of ‘I Really Mean It’ and ‘Suck It Or Not’. Watch it via YouTube below. 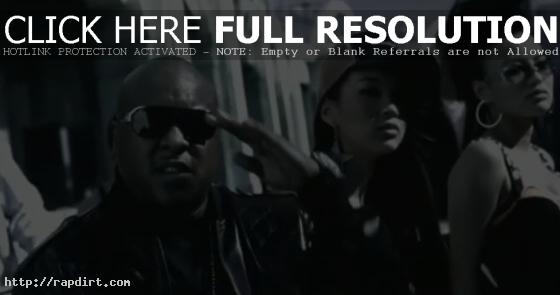 Jadakiss is out with the video to his new single ‘Can’t Stop Me’, the second release off the Yonkers, New York rapper’s upcoming third studio album ‘The Last Kiss’, out March 10th on Roc-A-Fella Records. Watch the Marc Klasfield directed video via YouTube below.

Jadakiss and DJ Green Lantern have teamed up again for the newly released ‘Kiss My Ass’ mixtape, and a promo clip featuring fans repeating the title has been posted online. Watch it via YouTube below.

Angie Martinez of Hot 97 in New York City interviewed Jadakiss, where the rapper talked about his new album ‘The Last Kiss’ and his new deal with Roc-A-Fella Records. Asked if he’s one of the best in the game right now, the D-Block rapper responded, “It’s different levels of ratings. It goes off money, it goes off album sales and then you got people that don’t care about none of that just think I’m incredible.” Jada said he thinks he’s incredible, but says “I’m gonna get even more incredible, I’m gonna get even better in the next year or two.” Watch the comments via YouTube below.

Jadakiss Releasing His ‘Kiss My Ass’ Album In October

Hip Hop Official caught up with Jadakiss at the LRG gifting suite in Los Angeles, where he talked about getting free swag and his new album ‘Kiss My Ass’, coming out late October. “Album is like 85% finished,” he said. Jada said the new LOX album drops a few months later in December. Watch the interview below.

Jadakiss had a cringeworthy moment at Hammerstein in New York City on Saturday night (November 20), when Jay-Z stopped his performance of ‘Roc Boys’, his last of the evening, to bring out the veteran rapper to be introduced as the newest member of the crew. When Green Lantern threw on the ‘All About the Benjamins’ instrumental, Jada moaned, “That’s Puff’s sh**. Put on one of my joints.” Then, after a long pause while Green checked his laptop for Jadakiss tracks, he finally came up with something: ‘The Champ is Here’. But Jada was stumped. “Man, I don’t know that song,” he said of the title track on the mixtape he did in 2004, which was produced by Green Lantern. “Why you gotta put me on the spot like that? They don’t want that.” Eventually, Jay grabbed the mic back and proceeded. YouTube has since removed the video.

Fabolous, Jadakiss, Ne-Yo, Ray J, and Twista were on hand for The Brand Jordan All-American Game on April 21st at Madison Square Garden in New York City. Check out pictures from FilmMagic and WireImage.

The Associated Press reports Jadakiss pleaded not guilty to an indictment charging him with possessing a loaded handgun and marijuana in White Plains on Thursday (February 8). If convicted, the rapper would face a maximum sentence of 16 months to seven years in prison.

Nas, Jadakiss, Fabolous, and Rakim were on hand for Nike Presents an All-Star 25th Anniversary Celebration of The Air Force 1 in Sport and Music on December 10th in New York City. Check out pictures from FilmMagic, GettyImages, and WireImage.