Jurassic 5 are out with the video to their new single ‘Ducky Boy’, directed by Decon’s Yoram Benz, from the Los Angeles alternative hip hop group’s ‘J5’ Deluxe re-issue, in stores now. Watch it below.

Jurassic 5 performed in concert at Carling Academy on September 26th in Bristol, England. Check out pictures from WireImage. 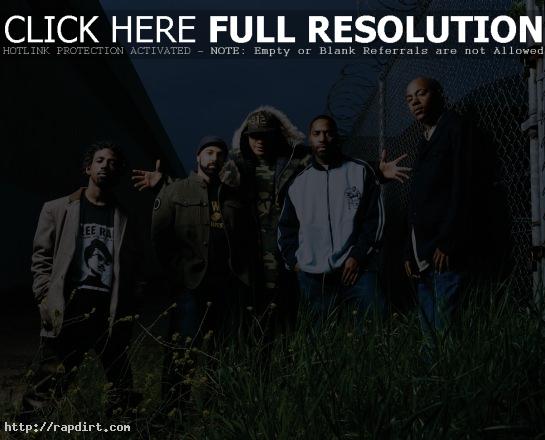 Rap acts on television this week include Yung Joc, who gets a 1st Look on ‘Total Request Lie’ on Monday; Paul Wall, who is Pre-RL on ‘TRL’ with Brooke Hogan on Tuesday; Nick Cannon, who visits ‘Last Call with Carson Daly’ on Tuesday and ‘TRL’ on Thursday; Rhymefest, who performs on ‘Jimmy Kimmel Live’ on Wednesday; and Jurassic 5, who performs on ‘Jimmy Kimmel Live’ on Friday.

Concerts Should Be By The Book

‘CD:USA’ spoke with Jurassic 5 and asked the group what are the important elements to building a good hip hop show. “Your transitions from song to song have to be smooth,” Akil said. “You have to look at it like it’s a book. You don’t just start in the middle of the book. You have an intro, a middle, and an ending and then you have the credits at the end. A lot of times, people come out and do their credits: ‘Yo! Shout out to my homeboy da da da da!’ Before they even give you the intro. The order be all mixed up and stuff, so if you have a beginning, middle, and end in there and the songs that you have, you place them in there.” The transcript at cdusa.tv has since been removed.

Jurassic 5 performed at the Bonnaroo Music and Arts Festival on June 10th in Manchester, Tennessee. Check out pictures from FilmMagic and GettyImages.

Cypress Hill, Jurassic 5, Mos Def, Q-Tip, and Xzibit were on hand for Rock the Bells at Holiday Havoc Concert on Saturday (November 13) at Angel Stadium in Anaheim, California. Check out pictures from WireImage.

Cypress Hill, Jurassic 5, Queen Latifah, Sean Paul, and Snoop Dogg were at The William Morris Agency and Budweiser Grammy Party on Sunday (February 8) at White Lotus in Los Angeles, California. Check out pictures from WireImage and check out pictures of Snoop performing at GettyImages.