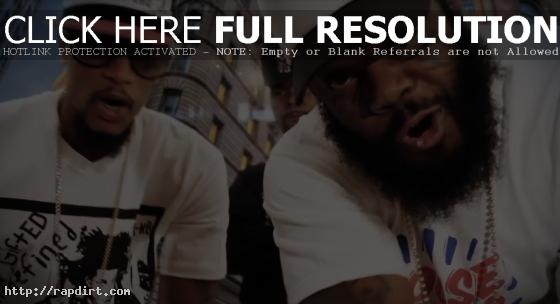 Pete Rock and Smif N Wessun are out with the music video to their new single ‘Top of the World’, featuring Memphis Bleek, off the ‘Monumental’ album, out now on Duck Down. Watch the Donald Robinson Cole and Olise Forel directed video via YouTube below.

Pete Rock & Smif N Wessun are out with the music video to their new single ‘Night Time’, featuring Buckshot. The track is off the rap duo and producer’s collaborative studio album ‘Monumental’, out now on Duck Down Records. Watch it below.

Duck Down has an inside look at Pete Rock & Smif N Wessun finalizing their album ‘Monumental’, in stores June 28th. Watch the brief studio session clip via YouTube below.

Pete Rock visited 1Xtra host Semtex the other night from the Def Jam offices in New York City, talking about the new album ‘NY’s Finest’ out February 26th, working with Jim Jones, Papoose, Raekwon, and more. Watch the segment below.

Brooklyn, NY September 23, 2004 – True hip-hop fans will rejoice to hear that veteran emcee Edo. G will release his sixth album later this fall. Edo. G, who burst on to the scene in the early 90’s with the classic party-starter song “I Gotta Have It,” collaborated with legendary producer Pete Rock to create an album that will be considered a “must-have” for years to come.
END_OF_DOCUMENT_TOKEN_TO_BE_REPLACED

Former front man for the Lost Boyz, Mr. Cheeks, is scheduled to kick off a month long tour featuring Pete Rock and Truth Hurts on August, 3rd in New York City. The tour, which hits 17 different cities along the way will promote Mr. Cheek’s third solo album, ‘Ladies and Ghettomen’ which will be released on September 14th. To find more information about the cities on Mr. Cheek’s tour or his upcoming album, visit mrcheeksonline.com.

The Ever-Growing Connection Of Hip-Hop And Shoes

Shoes have always played a big role in Hip-Hop culture. From songs like RUN DMC’s classic ‘My Adidas’, to Nelly’s more recent ‘Air Force Ones’, rappers have constantly extolled the virtues of their favorite kicks. DJ and label owner Bobbito Garcia even wrote a book about this connection titled ‘Where’d You Get Those? New York City’s Sneaker Culture: 1960-1987’.
END_OF_DOCUMENT_TOKEN_TO_BE_REPLACED