Jamal ‘Shyne’ Barrow tells XXL magazine he feels a strange connection to Microsoft multibillionaire Bill Gates. “I never seen nobody on this Earth that don’t go through it,” he explained in a prison interview. “Bill Gates is gettin’ washed up by Apple and Google and all those dudes right now, and he’s doin’ nothing. Gotta go through it. You understand what I’m talkin’ about?”

From Rap Buzz To Bust

Jim Farber of the New York Daily News profiled the trouble Mase and Shyne experienced in album sales with their latest efforts, ‘Welcome Back’ and ‘Godfather Buried Alive’. Farber noted that both rappers’ material seemed behind the times, Shyne do to his incarceration and Mase do to being away from hip hop for so long and questions about his credibility. The story at nydailynews.com has since been removed.

The LA Times profiled Shyne’s disappointing sales for ‘Godfather Buried Alive’, which has only cleared 354,000 copies since its August 10th release. Def Jam spent more than $4 million to sign, record and market ‘Godfather’, sources said. Based on sales figures compiled by Nielsen SoundScan, the company has recovered about $1.3 million of that investment. High-level sources at Def Jam said they didn’t expect the record to pick up steam at this point and were prepared to abandon the project.

While not perfect, Godfather Buried Alive should continue the hype machine for Shyne until his release from prison. With a new sense of hunger and an uncompromising truthfulness, Shyne Po just might be the next big emcee in this hip-hop game. Read the full review. 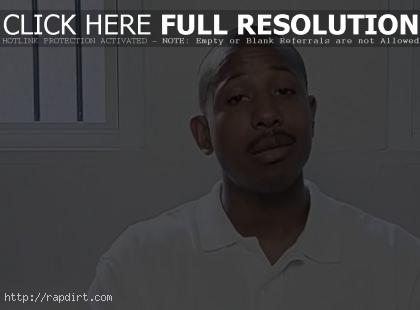 Shyne is out with the video to his new single ‘Jimmy Choo’, featuring Ashanti, from his album ‘Godfather Buried Alive’. Watch it via YouTube below.

Game of G-Unit, Guru, and Adure were on hand as Beck’s Presents Shyne’s Album Release, which he of course couldn’t attend at Strata in New York City on Thursday (August 12). Check out pictures from WireImage.

Shyne Fends Off Marriage Proposals While Locked Up

Shyne tells The New York Post he’s had a steady flow of marriage proposals coming through the mail while he is serving his sentence at the Clinton County Correctional Facility in upstate New York. “I declined to get married, which would have given me conjugal visits,” Shyne said. “And some of the most beautiful women in the world were writing me. I didn’t even write back.”

Shyne, who is seeking a new trial stemming from an infamous 1999 incident involving Sean ‘P. Diddy’ Combs, his then-girlfriend Jennifer Lopez, and a wild shootout at a Manhattan club, tells The New York Daily News he thinks the problem with his first trial was that he agreed to use the same legal team paid for by Combs. “I was fighting against Combs’ defense,” he says. “People were injured, so somebody had to go to jail. At end of the day, it wasn’t going to be [Combs] because he was paying the lawyers. I never had a chance.” Shyne blames Combs for “telling the jury I was just another artist on his label and that there was no danger that night.” Shyne insists he was righteously defending a friend who’d been threatened.

Foxy Brown tells The New York Daily News she’s working on an album with Shyne, even though he’s serving 10 years in prison for assault and gun possession. “[It’s] called ‘Bonnie and Shyne,'” Foxy revealed. As for how she managed to get his vocals recorded, Foxy responded, “I go to see him often, and he has a lot of special privileges.”