Is Kanye West Chanting The Evil Away?

The Sun hears that Kanye West has been chanting lately to get rid of evil spirits. “Kanye has started this strange new ritual of chanting these spiritual songs,” a source told the British tabloid. “He thinks it rids his space of ghosts and spirits. He reckons his singing will improve if he gets rid of the demons.”

News of the World reports fresh off of winning ‘The X Factor’, Alexandra Burke has received a request from 50 Cent to record a duet. “She’s had loads of offers but 50 Cent is a huge name,” a source told the British tabloid. “This could instantly crack the US market for her. Leona Lewis has done it, but not nearly as fast.”

Kanye West Moving To London To Train In Fashion?

The Mirror reports Kanye West is applying to train at Louis Vuitton’s luxury goods headquarters on London’s Bond Street, with the rapper set to move to England as early as spring. “I’m going to go and take an internship and just do something that’s like completely normal, and just rap at the weekends or something,” West reportedly told the British tabloid. Read more.

Rav Singh of News of the World hears Eminem is set to release his comeback album ‘King Mathers’ by year’s end. “It’s exciting times and, of course, there’s massive expectation surrounding this new record,” a source told th British tabloid. “But the fans need not worry about its quality. Most of the music’s being mastered at the moment. There’s a real belief the album will go stellar.” The full story at newsoftheworld.co.uk has since been removed. 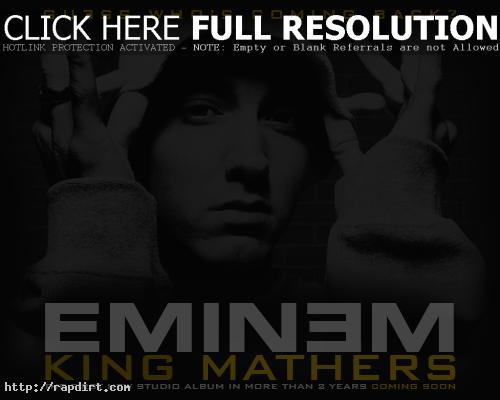 A source tells The Mirror’s 3AM that during Jay-Z’s trip to Nigeria for the Africa Rising gig, the rapper requested a watermelon carved out in the shape of his wife Beyonce’s breasts. “One giant watermelon was split in two and ornately carved into a mold of Beyonce’s boobs,” the tipster claimed. “Two cherries were used as nipples.”

Several online news outlets said The Sun was reporting Kanye West has enrolled in anger management classes to keep is infamous temper in control, though the story doesn’t appear in the online edition. “Kanye’s management team came up with the idea,” a source told the British tabloid. “His mood swings were beginning to play a part in his commercial enterprises as people felt he was miserable all the time.”

In response to the gossip report, Kanye wrote on his blog at KanyeUnivercity on Monday:

Do yall remember when people said my fiance was pregnant? What happened to that rumor? I guess after we broke up it was just forgot about? I’m just using that as an example of how people make up stuff and everybody runs with it. I had my own family asking me about that. Now the media is saying I’m going to anger management something or ‘nother. I have never had any conversations about anger management. If anything, I need anger enhancement!! lol! I get off the plane in Hawaii today and the world is saying my management team said blah blah blah… SIIIIIIGGGHHHH! I told the media you can’t make up lies about me because I have a media outlet myself. Oh and sidebar I don’t know if everyone has realized this yet but I don’t do interviews if there’s anything I wanna say I’ll say right here on my own blog.

The Sun reports Eminem is set to make a comeback at former South African president Nelson Mandela’s 90th birthday bash on June 27th in London’s Hyde Park. “We’re amazed to have Eminem on board,” an insider told the tabloid. “We wanted some of the greatest artists from recent times and Eminem was on the list. Brian [May of Queen, who is organizing the event] contacted Eminem’s management on the off-chance and never expected him to go for it. It’s going to be explosive stuff and it’s certainly a big stage to make his comeback.” Read more.

A source confirmed to Usmagazine.com that Jay-Z and Beyonce Knowles took out a marriage license in Scarsdale, New York on Tuesday. The couple, who have dated for over four years, have reportedly been telling pals they plan to wed in May, after Jay-Z’s current tour ends. “Jay is trying to pull it together quickly and on the fly to keep it private,” the source told Us. “They really wanted it to be private.”

Because Jay-Z made more money as an artist and entrepreneur, The New York Post said the decision to quit as president of Def Jam was financially motivated. “Jay is focusing on opening five more 40/40 clubs,” a source said. “He opened Las Vegas on New Year’s and up next are LA, Miami, Chicago, London and Houston. He’s also looking for hotel space in New York. He wants to open a chic, boutique hotel called The Jay. He just didn’t have time to be president of Def Jam.” Jay’s rep told Page Six, “Mr. Carter is still considering several opportunities.”

Diddy Settling Down With Cassie

The New York Post hears that Sean ‘Diddy’ Combs has “cut off the various girls he has around the world” and is settling down with on/off lover Cassie. “She recently broke up with her boyfriend, and they’re in Miami together now,” a source tells Page Six. “They’re holed up together in Miami, very low-key. He’s really in love with her.”