Atlanta based rapper Soulja Boy has posted his latest dance move. Joined by Arab, Soulja Boy dances along to his track ‘Super Soak’. Watch it via YouTube below. 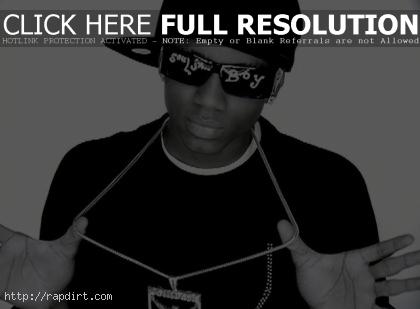 Soulja Boy is out with the video to his new single ‘Let Me Get Em (ShootOut)’, from the Atlanta based rapper’s debut album ‘Souljaboytellem.com’, out now on Interscope Records. Watch it via YouTube below.

Scheduled rap acts on television this week, many of which probably won’t appear due to the writer’s strike, include:

Common, who performs on ‘The Late Show with David Letterman’ on Tuesday

Soulja Boy, who performs on ‘Last Call with Carson Daly’ on Tuesday

Missy Elliott and Lil’ Kim, who perform with Keyshia Cole on ‘The Late Show’ on Wednesday

Pittsburgh Slim, who performs on ‘Last Call’ on Wednesday

Cassidy and Swizz Beatz, who perform on ‘TRL’ on Thursday

Chingy, who performs on ‘Last Call’ on Friday

Taking advantage of a deserted airport, Atlanta based rapper Soulja Boy went for a joy ride on a Northwest Airlines electric cart for the disabled. Watch the clip via YouTube below.

Soulja Boy checked in with fans from his hotel room in a video posting on his YouTube page, verifying his Soulja-Boy page on Bebo from his laptop. Then the Atlanta based rapper went on the balcony and took a leak, almost hitting someone walking at ground level. He’s since removed the video.

Soulja Boy posted footage of himself, Arab, and Miami Mike playing around in a hotel. Watch the redundant ‘Go Ham On Em’ (chanted at least 50 times) footage via MySpace below.

Soulja Boy is out with the video to his new single ‘Soulja Girl’, from the rapper’s debut album ‘SouljaBoyTellem.com’. Watch it via YouTube below.

Soulja Boy is the only rap act making television appearances this week, visiting ‘106 & Park’ on Monday and ‘Total Request Live’ on Tuesday, and performing on ‘Jimmy Kimmel Live’ on Thursday. The Atlanta rapper’s debut album ‘SouljaBoyTellem.com’ is out Tuesday.

Soulja Boy posted another clip on his YouTube page, featuring the rapper making some appearances on radio stations, ‘TRL’, photoshoots, punching Spider-Man, and more ahead of the October 2nd release of his debut album ‘Soulja Boy Tellem’. Watch it below.

Soulja Boy visited ‘Total Request Live’ on August 27 at MTV Studios in New York City to perform ‘Crank That’. Watch the performance below the fold.
END_OF_DOCUMENT_TOKEN_TO_BE_REPLACED